United States of America is one of the global leaders when it comes to production of vehicles. The country has long and successful history of making autos and is known around the world for a great amount of American auto brands with high reputation. American car companies are regarded as one of the best in the world, but such a situation has particular reasons behind. The roots of this success go deep in the history of the industry in the United States. Although the industry became the leading one right after its establishment, crises occurred as well, but American car brands managed to overcome them.

The automotive industry in the U.S. started in the end of the 19th century. It became successful and leading in the world really quickly. There were several reasons for this. The first reason is the possibility of massive production. Right after establishment of the industry, national car makers were able to build autos in large quantities. Also, the market in the country was really big. Demand for vehicles and ability of people to buy autos were on the high level. Both these factors allowed the industry to grow rapidly. Along with the evolvement of the industry a lot of new American car companies appeared, their number exceeded a hundred. However, soon three leading companies emerged, which are Ford, Chrysler, and General Motors. 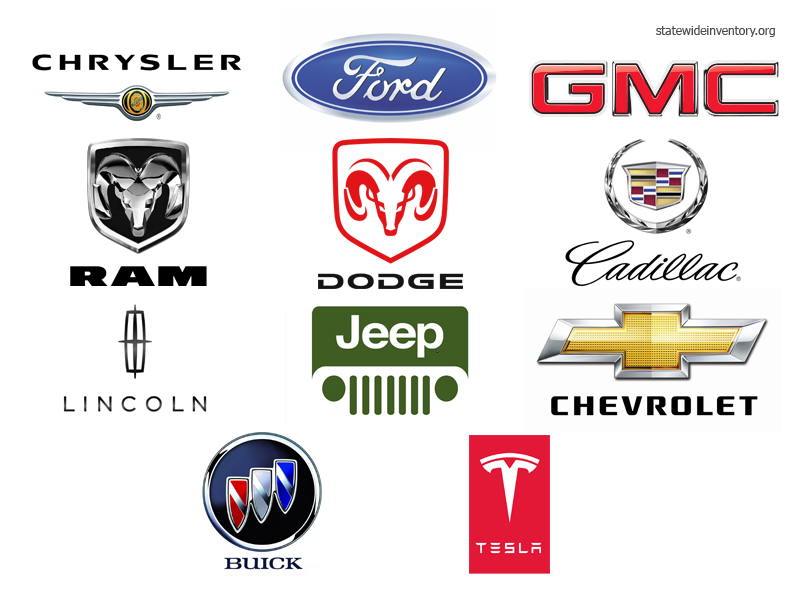 During the course of the history of automobile making in the United States a lot of events happened and many changed. The most important that helped in the development was great involvement of states and federal authorities who did a lot when it comes to building roads. The automotive industry developed together with the country, the demand for cars grew along with the building of new roads across the federation. But even though the success is really remarkable, crises also hit the industry.

The United States of America stayed a global leader in production and sales of cars for a long time. In the 1950s, the overall global amount of produced autos was equal to 10.5 million units, and nearly 8 million were manufactured by American car brands. However, in the 70s, the situation began to change with rapidly growing auto production in Japan. In 80s and 90s, Japan manufactured and sold even more autos than the U.S. did. However, in 2000s, the lead was taken by the U.S. again, in the year 2000 American car brands produced and sold almost 12.8 million units, which is regarded as a peak level of their production.

The latest ten years are marked with a fantastic growth of manufactured and sold cars in China. In 2005, this country produced 5.7 million units, while the U.S. manufactured almost 12 millions. In the year 2010, the number of produced cars in China tripled, and the American car brands sold only 7.7 million. Can we call this a crisis in the American automotive industry? Probably not, because American auto companies, unlike Chinese, stay the most reputable and respected until today, despite producing two times less cars than their Chinese competitors.

If we take a look at the latest statistics (2014) on manufacturing of cars, we will see that the USA takes the seconds place with 11.6 million units produced, while China is a leader in this field with a number of produced cars at the level of 23.7 million. What can be certainly said about the modern automotive industry in the United States is that three largest American car brands still play a prominent role. Ford, General Motors and Chrysler determine evolvement directions of the entire industry and in most foreign countries this American industry associates with the three companies.

Chrysler is one of three largest American auto companies. The company was established in 1925 and is named after its founder, Walter Chrysler. Chrysler took one of leading places in the industry righter after its establishment and holds this place until today. The company operates worldwide and apart from automobiles produces also parts for cars and commercial vehicles.

Chrysler currently belongs to a large group of companies, Fiat Chrysler Automobiles LLC, which also includes such brands as Jeep, RAM and Dodge. The headquarters of the group are located in Detroit, Michigan.

Initially, Dodge was established as a company that manufactures parts for autos in 1900. 14 years later, the company also started to build cars. The founders of Dodge are John and Horace Dodge. During the course of its history, the automaker worked both on its own and in tight cooperation with other companies.

Nowadays, the brand belongs to a large auto manufacturing group that unites Dodge, Jeep, RAM and Chrysler. Within the group, Dodge is positioned as an automaker that produces performance vehicles. The company works worldwide, except for states of the Western Europe.

Jeep is another member of the FCA group. This company was founded in 1941 and was greatly involved in the production of vehicles for military needs that existed at that time. At some point after its establishment, the company was acquired by the American Motors Corporation that, in its turn, was bought by the Chrysler Company in 1987.

As for the modern Jeep, the main focus of the company is the production of sports utility vehicles. Besides, the company also builds off-road cars. In the past, Jeep was also working on pickups, but this is not common for the automaker anymore.

Ram Trucks is a brand that belongs to the FCA group and was established in 1981. Initially, the company was called Dodge Trucks as it was a division of Dodge. In 2009, the company has obtained the name it is known for nowadays. The company is fully focused on the production of vans, trucks and some types of luxury vehicles.

Ram Trucks, as it becomes clear from the name, is best-known for production of trucks. The company delivers trucks of high quality. However, the field of the company’s operation is strictly limited by the markets of North America, Peru, Brazil and Middle East.

Ford also referred to as Ford Motor Company is a public company and, most likely, the best-known American auto brand in the world. It was founded in 1903 by Henry Ford. The company is known for production of autos, luxury and commercial cars, and auto parts. Ford is headquartered in Dearborn, Detroit, Michigan.

During the history of its existence, Ford cooperated with many different brands, including Volvo, Mercury, Jaguar and Land Rover. Right at the moment, the divisions of the company are only Lincoln, a brand for luxury cars, and Motorcraft that deals with auto parts. Nearly 180,000 people are employed in the company.

Lincoln is an American auto brand that is currently owned by the Ford Company and produces luxury cars. Lincoln was founded in 1917 by Henry Leland, became a part of Ford in 1922 and stays it until today. Apart from luxury vehicles, Lincoln is known inside and outside the USA for its production of limousines.

Regions where Lincoln operates are North America, East Asia and Middle East. What can be said about the modern development of the company is that a high-priority region for Lincoln is China. The automaker plans to introduce about five models to the Chinese market until the end of the next year.

This American automaker is among the many that are currently owned by a large GM group. However, Buick itself has a long and successful history. It was founded 1903 by David Buick and for a greater part of its existence was regarded as an automaker that manufactures entry-level luxury vehicles.

Being extremely popular among some categories in the U.S., Buick is not limited with only the American market. It also operates in other countries of North America and China. Recently, the automaker broke its own record of sales, by selling nearly 1.17 million units in the year 2017.

Cadillac is a luxurious American car brand that belongs to General Motors and is headquartered in New York City. The company was founded in Michigan in 1902 by Henry Leland, William Murphy and Lemuel Bowen. Although being one of the oldest automaker in the U.S., the company was bought by a larger General Motors in 1909, soon after the foundation.

Being a worldwide-operating company, Cadillac produces various luxury models to satisfy the needs of its customers around the globe. As for the latest models by the automaker, Cadillac CTS is regarded as one of the most successful.

Chevrolet is probably the best-known among all American car brands built by General Motors. The company was founded in 1911 by William Durant and Louis Chevrolet. It operates worldwide except for countries of the Oceania region.

The range of automobiles produced by Chevrolet is really large. Apart from cars, the automaker also manufactures such products as commercial vehicles and trucks. Generally, Chevrolet takes a specific place in the auto market. Different categories of customers will find suitable cars for their needs in the range. The automaker is also notable because of its activity and numerous production facilities outside the U.S.

GMC is another part of General Motors and has its primary focus on the production of such vehicles as pickups, commercial trucks, sports utility vehicles, and vans. The area served by the automaker includes North America and Middle East. GMC was founded in 1901 by William Durant.

The reputation of manufacturing quality trucks and other types of vehicles was gained by GMC soon after the company was established. This high reputation is maintained until today, which is proved by the fact that the automaker produces models like Acadia, Terrain and others.

Tesla Motors is an ambitious American auto project that is solely focused on the production of electric vehicles. The key person in the company is Elon Musk, among investors there are also another famous people, including Google executives. Tesla Motors was founded in 2003 and is headquartered in Palo Alto.

Tesla Motors have already completed two projects. One is Tesla Roadster and another is Tesla Model S. There are also two other models that are being developed and will soon be put on sale by Tesla Motors, those models are Model X and Model 3. Apart from electric vehicles, the company also develops batteries for their cars.