France is among the most developed countries in terms of car production. The latest statistics on the amount of cars manufactured in the entire world is regarding the year 2014. And according to the statistics, France holds the 13th position in the list with more than 1.8 million units manufactured. However, it is also noteworthy that during the last ten years that number went down almost two times with over 3.5 million units manufactured by French car companies in 2005.

The history of car making in France takes its roots in 1769, when the first mechanical vehicle of self-propelled type was built. It has taken 90 years to develop an engine of internal combustion which was created in 1859. The further progress of the industry in the country was rapid, and it made France the leading automaker in the world. The first French car brands were also appearing at that time. Some of them exist until today. 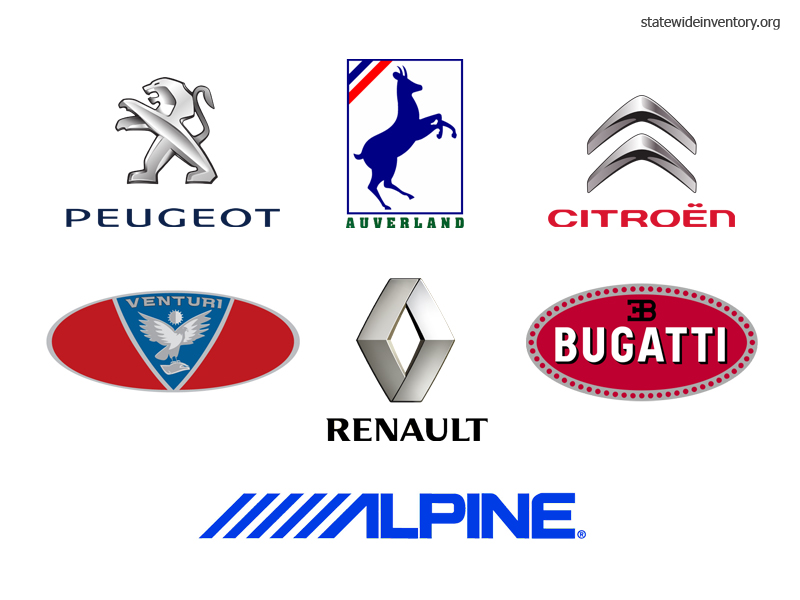 There are several companies that compete for the title of the largest French car manufacturer. These companies are Peugeot, Renault and Citroen. In the modern age Peugeot and Citroen unite their efforts and work in strong partnership. As for Renault, it is currently a part of the group together with Nissan. The most significant automakers from France are described below.

Initially, this company was not organized for production of vehicles. The first things produced by Peugeot, which is named after its founding family, were bicycles and coffee mills. It was in 1810, and the first development related to vehicles was delivered in 1889. The first car by the maker quickly followed in 1890. While the French automotive industry was the most growing among car industries of the world, Peugeot grew as well, becoming one of the largest car makers in the world. Sochaux, a French city, is regarded as the home city of Peugeot.

During its history, the automaker was really successful, producing many popular autos that received different awards. Such models as 504, 405, 307, 308, and 208 are regarded as very good cars and were marked by awards in Europe.

Nowadays, given a general decline in the automotive industry of France, national automakers strive to unite in order to be more productive. However, the trend began in 1976, and since then Peugeot is a part of the PSA Peugeot Citroen group, which also includes Citroen. Besides, the cooperation also includes Dongfeng Motor Corporation. Thanks to this, Peugeot and the group are now fulfilling their ambitious plans in the Chinese market.

Citroen can be called the most significant French automaker just because of the fact that it became the first automaker to start massive production of vehicles outside of the U.S. Organized in 1919 by Andre-Gustave Citroen, the company is also notable because it was first to start offering accompanying services along with production of cars. Citroen has a reputation of a really innovative automaker that produces both conventional and sports cars.

There are many notable autos produced by the automaker. The Citroen DS model was even included in the list of the most influential autos of the 20th century. There the model took the third place. Until today, the DS models by Citroen stay among the most popular by the automaker. Other models that can be marked are ZX, C5, C3, and C4.

From the 1976 and until today, Citroen is a part of the group with Peugeot. The brand also has an extensive history of selling its vehicles in China. Recently, operation of the group in China was made easier thanks to the inclusion of the Dongfeng manufacturer to the group. As of 2013, the production output of the brand was equal to 1.266 million vehicles. The brand works worldwide, except for some countries of the Northern America and South Asia.

Renault is a multinational car maker from France and a company that along with Nissan forms one of the largest automobile groups in the world. Currently, the group takes the global fourth place. Renault was founded in 1899 and during the course of its history produced numerous types of vehicles. The founders of the company were the Renault brothers. The company developed in the same pace with the entire industry in France and managed to become quite successful, avoiding serious problems.

What is very notable and believed to be the most important aspect of the company’s success is its close cooperation with other global automakers. Apart from Nissan which constitutes the group with Renault, the company also works together with Romanian Dacia, Russian AvtoVAZ, its own Korean division, and with German Daimler AG.

While the production output of Renault is really high in the amount of 2.7 million for the year 2013, the most notable vehicles by the company are Renault Safrane, Renault Scenic, Renault Clio, and Renault Captur. Besides, there are also great expectations regarding the Renault Espace. The company has plans of production of many high quality vehicles in the nearest future.

Alpine is an automaker based in France that manufactures sports, racing and street autos. The company was founded by Jean Redele in 1955, and its headquarters is located in a French city Dieppe. Currently, this automaker is a subsidiary of a larger French company Renault.

During its history, Alpine developed many notable vehicles, including A106, A108, A110 and GTA/A610. The most recent notable vehicle by them is A110-50 that was developed in cooperation with Renault and presented at the auto show in Shanghai.

Auverland is a company that is regarded as a leader in the field of production of armored vehicles. For 10 years already, the company holds the official name Panhard General Defense. While having a small turnover, the company has very good reputation.

Models produced by Auverland are Jeep like and belong to the four wheel drive type. Petit Vehicule Protege is currently the most notable vehicle by the automaker.

Bugatti Automobiles is a French subsidiary of Volkswagen AG that develops and builds luxury cars that have high performance rate. Bugatti was founded in 1998 and serves in the entire world, except for Australia.

Bugatti is most notable for production of fast super cars. Among those we should definitely mark Bugatti Veyron which stands out with its engine with sixteen cylinders and over 1,000 PS, as well as with the level of speed that amounts to more than 400 km/h.

The main field of Venturi Automobiles work is manufacture, design and sale of luxury electric cars. The company was founded by Claude Poiraud and Gerard Godfroy and is based in Monaco.

Initially, the company was developing non-electric vehicles. The notable among those are 300 Atlantique, 260 LM 3.4, and Transcup 210. After being bought by a local millionaire, Venturi focused on electric models, manufacturing such model as America, Fetish, and Eclectic.